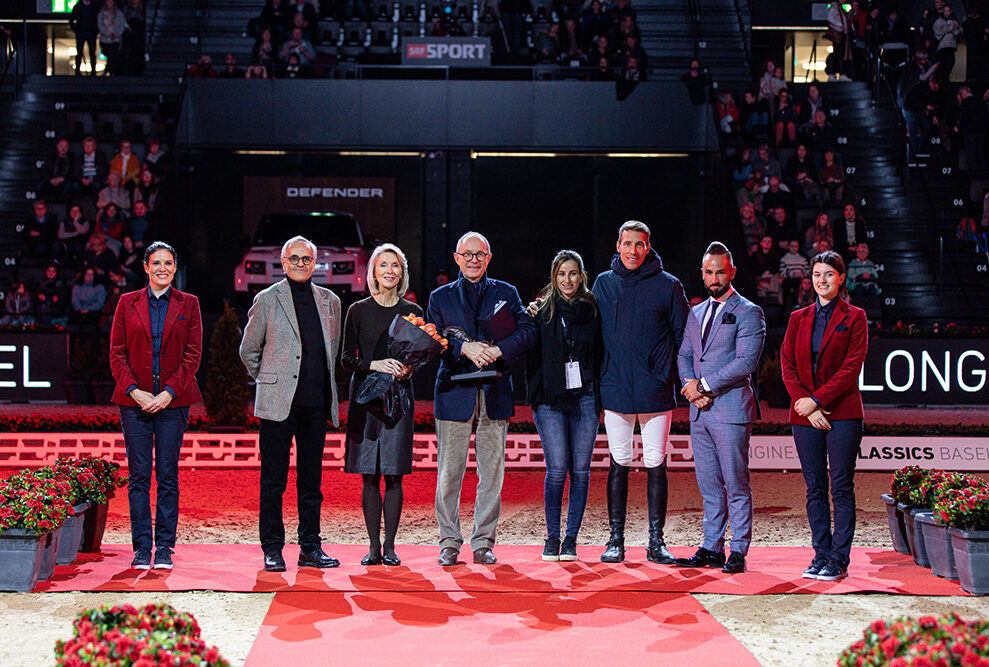 Switzerland’s Georg Kaehny, owner of the horses King Edward and Iliana ridden by the Swedish rider Henrik Von Eckermann, wins for the first time the Longines Owner of the Year trophy. The award ceremony took place during the Longines CHI Classics Basel (SUI), in the presence of Yanick Rossier, Longines International Sponsorship & Events Manager, and Dominique Mégret, Chairman of the Jumping Owners Club. This award, created in 2004 and approved by the FEI, illustrates the importance of recognizing the involvement of the owners in building an international career in show jumping. It is proudly supported by the Swiss watch brand Longines, which is the Official Partner of the Jumping Owners Club.

After years of supporting the world of show jumping as the owner of Janika Sprunger’s top horses – including the fabulous Paloubet d’Halong and Bacardi VDL – Georg Kaehny is finally seeing his investment rewarded. This result was made possible by the outstanding season of the best horse of the year 2022, King Edward, double gold medalist at the World Championships in Herning (DEN) ridden by Henrik Von Eckermann (SWE).

Dominique Mégret, Chairman of the Jumping Owners Club, was very pleased with the success of Georg Kaehny for the season 2022. “Georg Kaehny was still missing a real consecration as a top-level horse owner” Dominique Mégret said. “ His achievements as a top horse owner are simply outstanding! His support, like that of all the passionate owners who are members of the Jumping Owners Club, is inseparable from the success of a whole team around two athletes, the rider and his horse. As the Chairman of the JOC, I am obviously proud that one of our member sees his efforts rewarded. But above all, this performance shows how important are loyalty, faith and respect. The strong, positive and long term relationship established between Georg, his rider and his whole team is certainly responsible for a major part of this incredible result. Building a successful long term partnership is what every rider should aim at.”

Matthieu Baumgartner, Longines Vice President Marketing, commented: “This year again, Longines is proud to be the Official Partner of the Jumping Owners Club to recognize contributions of the most successful owner of the year at the 2022 Longines Owner of the Year award ceremony. Driven by our unrelenting commitment to excellence, we will continue to support the finest talents in showjumping and are thrilled to celebrate the achievement of Georg Kaehny, the 2022 Longines Owner of the Year. On behalf of Longines, we would like to congratulate him for his accomplishments and wish him all the best in his future endeavors. ”

Ingmar de Vos, FEI President, said: “Many congratulations to Georg Kaehny for winning the prestigious Longines Owner of the Year award. His support of top equestrian athletes over the years has been unfailing and tonight’s recognition is richly deserved. The achievements of the horses Iliana and especially of King Edward, the best horse of 2022, who carried Henrik von Eckermann to historic double gold for Sweden at the FEI Jumping World Championships in Herning (DEN) last summer and to Number One slot of the Longines Rankings, and who are owned by Georg Kaehny, are particularly impressive. Horse owners are the unsung heroes of equestrianism and without their dedication and faith our sport would not be possible. I would like to take this opportunity to thank Longines for their remarkable support of excellence in equestrian sport in all categories.“

The next two owners in the ranking are at the 2nd place, Luigi Baleri (owner of Chaplin, The Sinner and Conner Jei ridden by Martin Fuchs for Switzerland), and at the 3rd place, Charlotte Söderstrom – Stuteri Arch (owner of H&M Indiana and H&M All In ridden by Malin Baryard-Johnsson & Peder Fredricsson for Sweden).