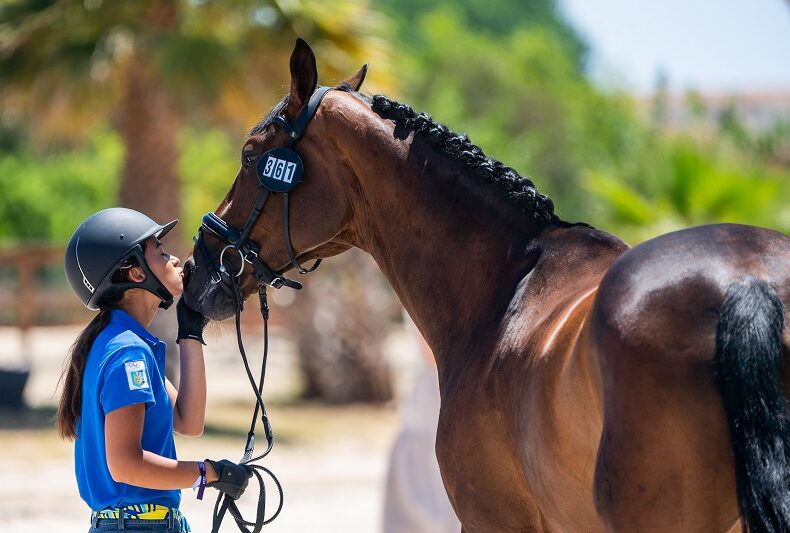 A recent visit by a Ukrainian delegation at the FEI Sports Forum 2022 in Lausanne sees additional initiatives and projects approved for funding by the FEI Solidarity Relief Fund.

Established in February 2022, the dedicated CHF 1 Million FEI Solidarity Relief Fund for Ukraine has been actively supporting a number of equestrian related schemes across Ukraine and neighbouring nations receiving Ukrainian horses and athletes. This includes, among other, the creation of a logistical hub in Granat (UKR), located between Lviv and the Polish border, to prepare horses for transfer into the European Union; funding and distribution to regional hubs of critical horse supplies such as feed and bedding; and, the emergency evacuation of a Vaulting team.

In order to deliver the aid efficiently and have the desired impact in situ, the FEI has been working hand in hand with the Ukrainian Equestrian Federation (UEF) and the UEF Charity Foundation, with FEI President and Chair of the Solidarity Committee Ingmar De Vos (BEL) referring to their Ukrainian colleagues as their “eyes and ears on the ground”.

For the FEI and the Ukrainian delegation, headed up by Secretary General Mykhailo Parkhomchuk from the Ukrainian Equestrian Federation (UEF) and accompanied by members from both the UEF and the Charity Foundation, this recent in-person visit provided a platform to discuss the priorities, review ongoing support systems in place, but also establish new programmes and set long term objectives for Ukraine and the FEI Solidarity Relief Fund.

Following these discussions, among the programmes being launched in Ukraine throughout May, four new athlete scholarships have been allocated; bespoke veterinary supplies have been sourced and prepared for dispatch; as well as financing for the purchase of 80 temporary horse boxes in order to support the set-up of additional horse hubs in Ukraine.

Based on the existing FEI Solidarity Athlete Scholarship scheme, two Ukrainian Jumping athletes – Oleksandr Prodan and Anastasia Bondarieva – and two Ukrainian Dressage athletes – Danylo Konovalov and Diana Borovyk – have been selected to receive the scholarship grant to support training and competition related preparation with the ultimate goal of representing Ukraine at FEI Championships in 2022 and 2023.

Aged between 17 and 24, they were already competing at international level before the onset of the war, but the current circumstances meant they had to put many of their aspirations on hold. For Diana Borovyk, having survived the blockade of Sumy and taking up residence in her local equestrian centre to be with her horses while the war raged around her, being able to continue training and competing is “a dream come true”. She has also received a personal invitation to participate in a Young Riders Class at the CHIO Aachen Festival 2022 where she has every intention of showing her sporting determination and perseverance in the face of adversity.

The dedicated emergency veterinary supplies which are being packaged into specialised kits and dispatched to strategic locations around Ukraine include over the counter as well as prescription medication so the veterinarians onsite have all the necessary supplies to care for the horses remaining in the country. The bespoke veterinary kits have been sourced through the FEI Veterinary Department and are entirely funded by the United States Equestrian Federation (USEF) Ukraine Relief Fund which is supplementing the FEI Solidarity Fund with 100 percent of all donations raised being distributed through the FEI to ensure effective and targeted use of the funds.

The USEF Ukraine Relief Fund has already reached over 100,000 USD and continues to work closely with US based philanthropic organisations to leverage their fundraising networks to support the horses and people of Ukraine.

In addition to the existing horse hub in Granat which was financed by the FEI to prepare all the necessary documentation for horses to cross the border and has been operational since March, the FEI is now working with the UEF Charity Foundation to supply 80 horseboxes to two new hubs which are being built to allow horses to remain safely in Ukraine. The new hubs are located near existing stables so the horses will have access to all the necessary infrastructures and can continue to train in good conditions.

These last two initiatives are especially relevant given the unknown when it comes to the duration of the conflict and the need to work together to keep horses and athletes safe in Ukraine. For FEI President Ingmar De Vos (BEL), there is a clear progression in the support structure and goals of the FEI Solidarity Relief Fund. “At the onset of the war, the FEI reacted quickly to the situation and set up the Solidarity Fund with the initial outreach aimed at sourcing and funding for immediate and vital supplies as well as evacuation related procedures, unaware of how long the conflict would perdure and how devastating it would be.

“We have now reached a point where we can be more strategic because we have the systems in place, so the meetings in Lausanne with the Ukrainian delegation at the end of April were really fruitful, and we can already see several programmes and initiatives launched as a result.

“The initiatives are a mix of short to mid-term objectives aimed at keeping individuals and horses safe and well in Ukraine but also long-term future proofing to ensure the sport is not entirely put on hold and can recover after the war. It has been awe-inspiring to see the global equestrian community come together to support Ukraine and we will continue to do everything in our power to maximise the reach of the FEI Solidarity Relief Fund to help the equestrian community and the horse lovers of Ukraine.”