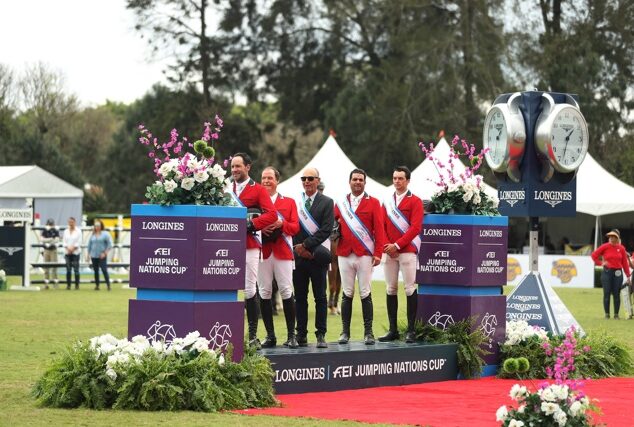 Mexico has triumphant homecoming at Coapexpan

Mexico earned the series title when the North and Central America and Caribbean division of the Longines FEI Jumping Nations Cup™ series last took place in 2019. In front of a home crowd at Coapexpan in Xalapa (MEX), the home squad set the tone for a strong 2022 season with a statement victory over Canada and the United States.

Led by newly appointed Chef d’Equipe Mark Laskin, the veteran squad of Nicolas Pizarro (Pia Contra), Federico Fernandez (Romeo), Patricio Pasquel (Babel) and Manuel Gonzalez Dufrane (Hortensia van de Leeuwerk) established a commanding three-rail lead in the first round with a perfect “0” score thanks to clear efforts from Fernandez, Pasquel and Gonzalez Dufrane. They finished things off with two rails in hand on a final score of 12.

It was not quite as smooth of sailing for the United States, as a young American squad was shockingly eliminated in the first round, and with no drop score, every rail counted for Canada, who sat on 12 faults entering Round 2.

But the Canadians rallied. The team’s youngest rider, Jacqueline Steffens produced a critical clear round to add some pressure, while Pizarro and Fernandez each recorded 8 faults in their respective second rounds. Pasquel and his spectacular homebred Babel bolstered things with a double-clear effort, and Gonzalez Dufrane and Hortensia van de Leeuwerk, who so often have acted as team anchors, delivered once again to cement Mexico’s status atop the podium.

“I’m very comfortable being the anchor rider, and I had no pressure in the second round,” Gonzalez Dufrane said. “My teammates had already [all but] clinched the win.”

The North and Central America and Caribbean division of the Longines FEI Jumping Nations Cup™ continues in Vancouver (CAN) on 5 June 2022.

“I’m just very grateful to my fellow riders for giving me this amazing gift to win a Nations Cup in our hometown,” Fernandez said, “because that’s the best feeling ever.”